Patricia Constable lives in Hagley, Worcestershire with her partner, Bob. The past two and a half years have been a difficult time for them both, as Mrs Constable sadly suffered an internal haemorrhage in her back which caused irreversible damage to her spinal cord. 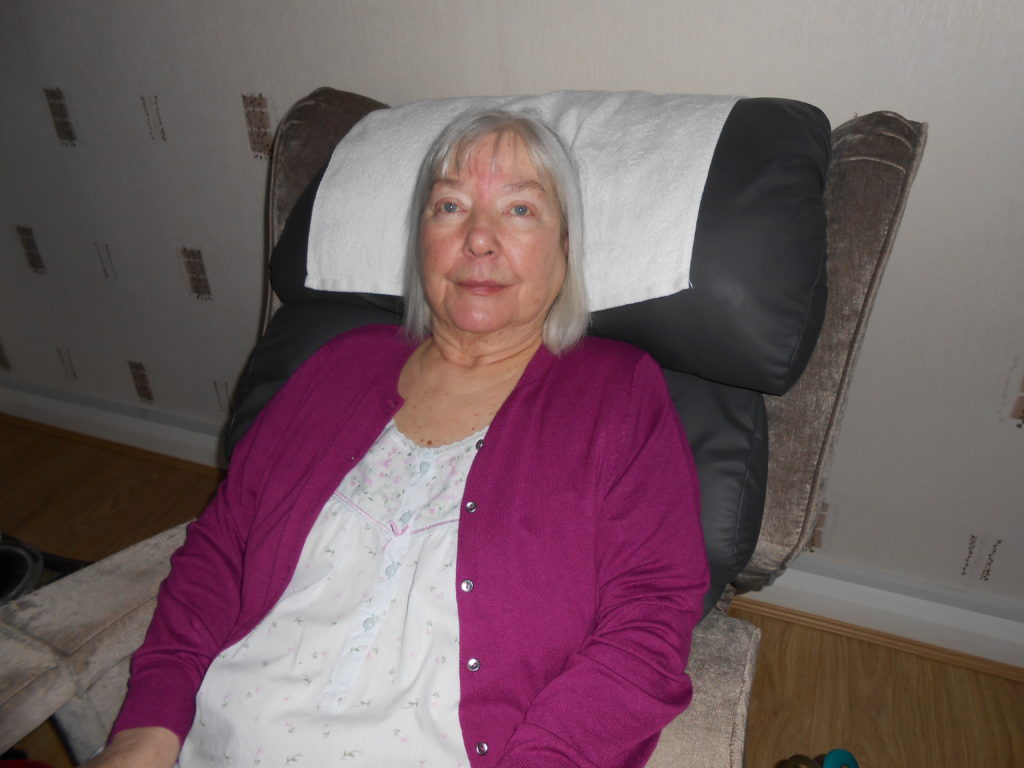 Mrs Constable had been living an active life before the damage to her spinal cord. She had her own upholstery sewing business and 2014 had been her most successful to date.

Unfortunately, however, on the morning of Saturday 3rd January 2015, after having an MRI Scan it showed that Mrs Constable had suffered an epidural hematoma which had compressed her spinal cord in the region of T6 to T10 and had made her paralysed from the waist down.

A few days later, it was decided that Mrs Constable should be transferred to Robert Jones and Agnes Hunt Orthopaedic Hospital for rehabilitation.

Unfortunately, a couple of months within her rehabilitation Mrs Constable suffered a transfer board injury which developed into a Grade 4 pressure ulcer.

A Grade 4 pressure ulcer can be very deep with the surrounding skin turning black and showing signs of infection, such as pus, odor and heat. In many cases, including Mrs Constable’s, it is possible to also see the person’s tendons, muscles and bone.

After a few months, Mrs Constable returned home where she was visited daily by local district nurses who assisted with washing, dressing and transfers for a period of six weeks.

Unfortunately, in mid-September the wound opened up again and Mrs Constable fell ill with four different infections and was admitted to Russells Hall Hospital where she received intensive treatment.

Finally, nearly 7 months later, Mrs Constable returned home but still needed nursing and personal care. Although the wound had closed, a Grade 4 pressure ulcer is never regarded as completely healed as the skin remains fragile and vulnerable to further damage. This meant that the wound needed to continue being dressed and regularly checked by District Nurses.

To ensure that her wound stays healed, Mrs Constable spends most of her day in bed resting, therefore she has a hospital-type bed with an active mattress and uses the Ekamove Patient Turning System to provide extensive pressure relief and prevent her wound from opening again.

The Ekamove Patient Turner is an automated, sensor controlled patient positioning system which is designed to gently and quietly turn a patient up to 30° without the need to be manually turned by a caregiver and can be programmed to meet the individual needs of the patient.

Mrs Constable has been using the Ekamove for 2 months and commented on her experience of using it;

‘I was sceptical when I first heard of the Ekamove Patient Turner. I thought it was going to be quite loud as it moved me, I was very surprised at how quiet it actually is.’

‘I’m also very relieved as I’ve been able to have a good night’s sleep without any interruptions, unlike when I was in hospital and had to be manually moved by nurses, even in the

early hours of the morning.’

‘My wound hasn’t opened up again as well, so now I’m able to stay at home

with Bob and my dog, Poppy.’

In Mrs Constable’s case, the Ekamove reduces dependency on her partner Bob and the need for him to manually move her.

The Ekamove air chamber is placed under a mattress and inflated to laterally lift the person lying on it. Operated via a control unit, you can select a separate positioning time for each step of the process and this offers better protection to the affected areas of a patient’s body.

Mrs Constable has had the leg extension fitted as well, Bob comments on having this added;

‘At first we didn’t think we needed the leg extension fitting, but after we’d given it a trial run we realised it helped move Pat’s legs at the same time of her body and worked well.’