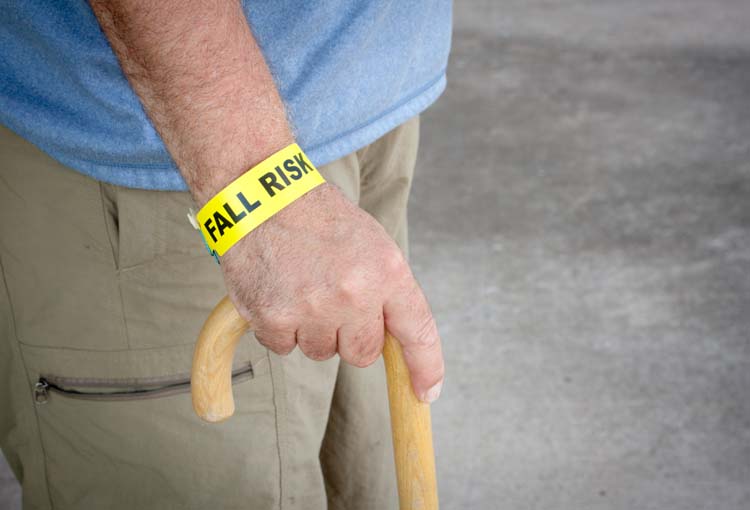 Prevention of Falls in the Elderly

Falls, fall-related injury, and fear of falling are important public health problems in an ageing society. Falls and mobility problems are the most common causes of referrals to intermediate care services.

Falls in the elderly are a problem for two main reasons:

Recurrent falls are defined as those occurring at least three times a year. Comorbidity is a serious problem both in terms of contributing to the cause of the fall and to the outcome. This is one reason why mortality three months after a fall is so high.

Falls can be devastating to the affected individual but are also expensive to manage. In particular, when associated with fracture of the proximal femur, they carry a high morbidity and mortality. Even lesser falls lead to loss of self-confidence and reduced quality of life. This can also have significant economic consequences because of the cost of inpatient care and also the loss of independence and the cost of residential care. Loss of independence requiring admission to a residential home is so dreaded by many elderly people that they regard it, quite literally, as a fate worse than death. Studies suggest that about 50% of patients who live independently before sustaining a hip fracture are unable to do so afterwards. 5-12% of hip fracture patients discharged to a post-acute care facility are re-admitted to the hospital within six weeks. About 5-10% of patients die within one month, whilst around 20-30% die within one year. Fragility fracture management alone is estimated to cost £1.7 billion per annum in the UK.Current estimates are that falls cost the NHS more than £2.3 billion per year.

The prevention of falls poses a challenge to carers and healthcare in general. Completely abolishing falls among older people is an impossible and undesirable prospect, since this would place undue restriction on their activity and autonomy. An acceptable balance between prevention and living with risk needs striking. Standard 6 in the National Service Framework (NSF) for the elderly was to reduce the number of falls which result in serious injury and ensure effective treatment and rehabilitation for those who have fallen. Subsequent Department of Health strategies, including the latest guidance from the National Institute for Health and Care Excellence (NICE), have re-emphasised the importance of this.

Injuries due to falls are the most common cause of mortality in people aged over 75 in the UK.

Other groups – young children and athletes – also have high incidence of falling but are less susceptible to injury (have less chronic diseases and age-related physiological changes) and recover more quickly.

These are many and varied with often more than one risk factor in the individual affected. It is essential to consider these when looking at preventative measures. Identification, particularly of modifiable risk factors, is important in this context.

Risk factors for falls include:

It is also instructive to examine the risk factors for fracture of the proximal femur. In so doing, this reveals risk factors not just for falls but for falls resulting in injury. Again, an individual may have several risk factors. These include:

Weak bones
With increasing age, conditions which predispose to weakness and fracture occur – for example:

Predisposition to falls
This includes the risk factors listed above as examples from research literature. Dementia is a particular risk factor for falls. In those with dementia, impaired visuospatial ability is often associated with increased risk of falling.

Poor self-protection
This is common in the elderly. Examples include:

PresentationFalling will present either with injuries or as a result of direct questioning. Many older people do not volunteer that they are falling and guidelines suggest healthcare professionals should routinely inquire about falls in the previous year.

A detailed history is essential. If possible, obtain some collateral history:

NICE recommends the following as being pragmatic tests which can be used in any situation and without the use of special equipment:

The scope for prevention

The scope for prevention can be appreciated by considering some of the common conditions and risk factors predisposing to falls in the elderly. From this, the wide range of preventative measures and treatment possibilities can be appreciated. Falls should be considered a symptom rather than a diagnosis, so that when a patient, usually an elderly person, presents with a history of falls, effort should be made to find the cause or causes.

Falls caused by accidents related to the patient’s environment can often be prevented. NICE recommends that all people at risk of falls should be offered a home assessment and interventions to modify environmental hazards. For example:

Measures such as the installation of handles and rails can reduce the risk of falls.The community team may work in association with the local council to install these without charge to the patient.

Rising from a chair and walking around the room require muscular power, proprioception and balance. Inactivity, perhaps associated with joint pain, as in osteoarthritis, results in weakness of muscles, loss of joint position sense and loss of balance. Hence:

There may be neurological disease causing motor and sensory impairment and increased risk of falls. For example:

Where possible, the underlying disease should be treated. A multidisciplinary approach with input from physiotherapy, occupational therapy and perhaps social care, is often required.

LOC is often followed by a fall. It may result from a variety of causes – for example:

Falls are called drop attacks when the cause is unknown, the event unexpected and there is no loss of consciousness. The account of a witness is most helpful. Causes may include:

NICE has found no firm evidence that treatment of visual disturbance as a single intervention reduces falls but agrees it is good practice to treat impaired vision where found.[5] Gradual loss of vision has many causes. These include:

Referral to an optician can be useful in diagnosis and management.

Drugs can contribute to falls in many ways. Medication needs to be reviewed regularly, taking into account risk and benefit. Examples of the ways in which drugs can increase the risk of falls include:

The aetiology of falls is usually multifactorial. The most effective prevention of falls is likely to involve a multidisciplinary, holistic and patient-specific approach. Measures should take into account the person’s medical conditions, social circumstances and psychological factors. The approaches may involve:

Primary prevention
This means taking measures to prevent falls in people who have not fallen. Examples include:

Secondary prevention
This means taking measures to prevent further falls in those who have had a previous fall/falls (with or without injury). Examples are likely to be similar to those for primary prevention but will be more focused in the light of information about the fall/falls. Those who have already had a fall are at much higher risk of further falls.

Who should be involved in prevention?

Many clinical commissioning groups now have a multidisciplinary falls team who can assess and treat those at risk but members of the primary care team should also contribute to the falls prevention strategy. Informal carers and local communities can also play a part.  One study found that encouraging patients to manage their own exercise-based falls prevention programme improves compliance and that physiotherapists should become ‘enablers’ rather than ‘experts’.

Anyone who has been admitted to hospital as a result of a fall or who has been identified as being at-risk should be assessed.

What measures are effective?

Methods deemed ineffective or with an equivocal evidence base include:

NICE recommends that the following patients should be considered at risk of falls (prior use of risk assessment tool not necessary):

A multifactorial assessment should be performed which should include:

Multifactorial interventions should be offered which should:

In the event of a fall see how Mangar products may help.