Frequently Asked Questions About: Falls In The Elderly

Mangar Health is a world leader in the design, manufacture and supply of inflatable moving and handling equipment, designed to safely lift a someone after a fall.

We understand that moving and handling patients can sometimes not only be distressing and undignified for them but can also increase the risk of injuries associated with hazardous manual lifting techniques which is why we advocate the use of safe lifting equipment.

People can have a lot of questions about both falls in general and what to do specifically during and after a fall.

What’s The Medical Definition Of A Fall?

A fall is described as ‘inadvertently coming to rest on the ground or other lower level without loss of consciousness and other than as a consequence of sudden onset of paralysis, epileptic seizure, excess alcohol intake or overwhelming external force’ (Source: Close et al 1999, p93).

How Common Are Falls In The Elderly?

It’s obviously possible for anyone to fall over at any time but falls in older people are a lot more common, especially if they have any kind of long-term health condition.

They’re also a very common but often overlooked cause of injury in the elderly.

How Many Elderly People Fall Each Year?

About one in three adults, in the UK, aged over 65, living at home, will have at least one fall a year and half of those will be frequent fallers.

In fact, the most common cause of death in the over 75’s, in the UK, are injuries caused by falls (source: ageuk.org.uk).

What Are The Most Common Causes Of Falls?

Intrinsic: These are factors related to the individual at risk of falling such as…

Extrinsic: These are factors external to the individual such as the environment they’re in, for instance…

Behavioural Risk Factors: These are factors that an individual may or may not realise they’re doing that contribute to their risk of falling, such as…

Why Are Elderly People More Prone To Falling?

There are many different reasons elderly people are more prone to falling but the three main ones are:

How Many People Are Injured Falling Over?

45% of people aged over 65 will be uninjured after a fall but they can cause the person to lose confidence, become withdrawn and feel as if they’ve lost their independence.

The length of time it takes a person to get into a safe and upright (standing or seated) position can have a significant impact on their recovery.

How Can You Prevent Falls In The Elderly?

If you or someone you know are prone to falling, then there are several steps that can be taken to reduce the risk of injury however it should be noted that it’s impossible to prevent falls completely so Post Fall Plans are essential…

Why Do People Fall Repeatedly In The Same Place?

Falling indoors in the same spot repeatedly is a sign that the above advice isn’t being followed.

It may be that the spot is too slippy or awkward to navigate; it may be that more time needs to be taken when rising from a chair; it may be extra support in the form of grab rails need to be installed.

If a fall does keep happening in the same spot it’s important a Post Falls Assessment takes place and questions such as why did the fall occur and how can falls be prevented in the future are asked and answered to prevent further injury.

Is There A Common Time Of Day When People Fall?

Most falls occur (and extra vigilance is needed) at particular times of the day.

As we’ve already stated, it’s extra important at these times to go slow, be careful and take frequent pauses to avoid a falls risk.

Other times to look out for are just after medication has been taken.

Many meds can make people drowsy so if medication has been taken it’s a good idea to take it sitting down, in a comfortable spot and just stay there for awhile afterwards until any drowsiness passes.

Are There Medicines That Can Make People Fall More?

Unfortunately, medications are the most common cause of increased fall risk in older people (source: Betterhealthwhileaging.net).

However, they’re also one of the easiest risk factors to change for those that suffer from frequent falls.

If you find you or someone you care for is falling frequently then a medication review with their Doctor or Health Care Practitioner may be needed as part of a falls prevention plan.

Once you’ve identified, if any, medications may be contributing to falls then a falls plan can be put in place to reduce, change or eliminate the use of these medications.

The three main ‘types’ of medication most likely to increase the risk of falls are:

What Can Be Done To Prevent Falls When Outside?

We’ve already discussed what can be done to prevent falls in the home environment but people wont always be in a safe, controlled environment like their home when they fall.

So what can be done to prevent or limit falls when a person is outdoors?

As a final piece of advice, if returning home after dark is a frequent occurrence then leaving a hall light on helps to see better on the approach to the front door as there can often be pools of shadow that are easy to trip in. Or better yet have an outdoor motion sensor light fitted that will come on automatically.

What Equipment Can I Buy To Help Prevent Falls?

What Should I Do If I Find Myself Falling?

So far, all our advice has been about the prevention of falls but no matter how hard you try you can’t ever completely eliminate the risk of falling.

If a fall does occur it’s important to try and fall ‘correctly’ to minimise/prevent any injuries that you might sustain.

What To Do After A Fall If You Can Get Up…

After a fall one of two things are likely to happen. Either the person who has fallen will be able to get up on their own or they won’t be able to. If there’s no injuries after the fall then the safest way to get back up is to…

If the person who has fallen is in any discomfort or pain and/or are unable to get up, then help needs to be sought…

What Should I Do If I See Someone Fall Over?

If you see someone fall over it’s important to resist the urge to help them straight back up as this can cause a lot more harm than good, especially if they’ve broken a bone.

Fortunately, West Midlands Ambulance Service has released a guide called IStumble for exactly this situation with a simple flow chart showing if it’s safe to lift someone after a fall or not. 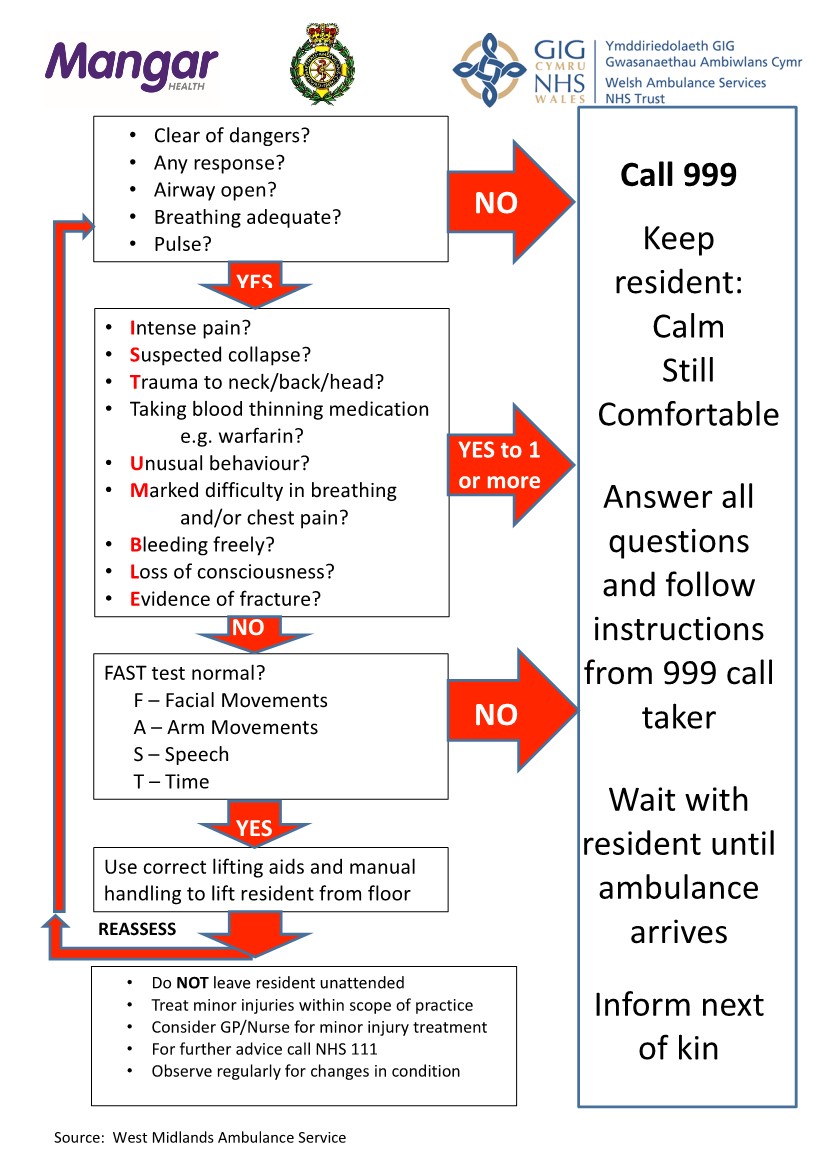 Should I Call An Ambulance After A Fall?

If the answer to any of the above is yes, then 999 should be dialled straight away.

But… if either yourself, or someone you know has fallen and are uninjured (as is the case in 45% of falls in the over 65’s) then other options should be considered before calling 999.

If there’s no injuries after the fall then our previous advice can be used to get up either alone or with the help of someone else.

If there’s no injuries but the person is unable to rise themselves or be helped up then a call to NHS 111 is needed to arrange for a Falls Team or Community First Responders crew to come out and lift them rather than an ambulance which may be needed for more serious incidents? (Source: nhs.uk)

What Equipment Would The Ambulance Service Use To Pick Someone Up Off The Floor?

If you’ve fallen and are unable to get up and an ambulance is on its way, then it’s reassuring for a lot of people to know exactly what will happen next.

All Ambulance Trusts in the UK use a device called the Mangar ELK which is an inflatable Emergency Lifting Cushion to get someone who has fallen over back onto their feet.

You can see the Mangar ELK in operation below…

What Are The Most Serious Consequences Of A Fall?

There tends to be two different consequences that occur after someone falls. Those are the physical and then the mental effects.

Physical symptoms are easiest to describe and can include:

Some fractures that occur after a fall can obviously be more serious than others with hip fractures causing the greatest number of problems.

That’s why we’ve spent so long discussing preventative measures to avoid falling when at home or outdoors.

Whilst getting older does increase the likelihood of a fall, the longer you can prevent them or minimise their impact to your life the happier and healthier you’ll stay.

How Long After A Fall Is It Safe To Be On The Floor?

It’s essential to get someone up from the floor after a fall as soon as possible as long lie (as it’s known) can lead to serious health complications which will negatively impact a person’s quality of life.

Within most official Post Falls plans there are two timescales defined for someone being left on the floor:

Consequences of a long lie post fall can be severe and range from:

It also gets worse. 20% of patients that are admitted to hospital after a fall will have been on the floor for at least an hour and of those 50% will be dead within six months, even if they were uninjured in the original fall (Source: Vellas et al).

And once someone has had a fall there’s a 60% chance they’ll have another!

This is why it’s vital to make sure the time someone spends on the floor post fall is minimised as much as possible.

I’m Very Anxious About Falling, What Can I Do?

Perhaps worse than the physical effects a fall can have on a person are the phycological effects, as they can often cause a vicious circle in an individual.

When a person falls for the first time it’s quite natural (and even understandable) to develop a fear or anxiety of falling.

This can then result in them leading a much more sedentary life, staying in a chair for much longer periods for instance, to minimise the risk of falling.

The problem is this reduced mobility/sedentary lifestyle means there can be additional weight gain through lack of exercise, an increase in blood pressure and a loss of muscle mass all of which are contributing factors to falls in the elderly. Another fall then occurs and the cycle spirals downwards.

If you do feel this applies to you or someone you know its important to try and increase confidence levels.

Do you have any questions about falling we’ve not answered here?