Falling Into Fear Of Falling

Fear of falling is a common term used in healthcare2, with patients asked “Do you have a fear of falling?” and a score often attributed to it3. 50% of people who have fallen and 50% of people who haven’t fallen are affected4. When you think about it though, it would be a bit unusual to find someone who didn’t have a ‘fear of falling’ – after all, who would be happy if they fell over? If someone told me I was going to fall over this week, it would definitely be on my mind. What we really want to know is whether someone has a fear of falling to the degree that it stops them from doing things, such as walking around the home or going outdoors.

Two main things are likely to influence our fear of falling: how likely we feel that it is that we are going to fall, and if we do fall, how bad the consequences will be. Essentially we are performing our own risk assessment of our mobility which will then influence our behaviour. If I felt there was a high chance that I was going to fall during an activity, I’d think twice about doing it. Likewise if I believed that I would significantly hurt myself if I fell, I’d think twice about doing it. If I felt there was both a high chance of me falling, and it would likely result in me significantly hurting myself, I would be unlikely to do it. As a 33 year old with no underlying medical conditions I do not feel that it is likely I will fall when I’m walking, or that I would hurt much more than my pride if I did fall, so falling is not on my mind and doesn’t stop me from walking. However, send me ice-skating and it’s a different story: I would have a high fear of falling and adapt my behaviour accordingly, likely by holding on tightly to the rails and going very slowly, or choosing not to take part at all. My fear of falling will have increased.

The highest risk factor for falling is having had a previous fall5, which can often cause an increase in fear of falling and altered behaviour. I was running along a muddy coast path a few years back when I slipped and fell, landing on my head. Fortunately, it was just soft muddy grass I landed on, so I got up and carried on. For the rest of the run though I was much more concerned about falling, and I ran a lot slower holding on to trees for support until my confidence returned. But imagine if you had reduced strength and balance, and essentially viewed just walking around your home as going on the ice rink or slippery muddy path. Add to that an experience of maybe having fallen last month and fracturing your wrist or hip. It would be understandable to lose confidence in mobilising and be worried about moving around much incase you fell again. This is something I witnessed multiple times both on hospital wards and in the community working as a Physiotherapist: Someone falls, with or without injury, they lose confidence, and so stop going out or walking much in order to reduce their risk of falling again.

The problem with this though is that by becoming less physically active in order to reduce the risk of falling whilst up and about, you are actually increasing your risk of future falls. Falls can lead to fear, and fear can lead to falls. This is because of a process called deconditioning, which has become a strong focus in healthcare recently through campaigns such as #EndPJparalysis5. Deconditioning is a process whereby physical ability deteriorates due to lack of activity6, with muscles becoming weaker, fitness decreasing and a reduction in balance. ‘Use it or lose it’ is a well-known expression, and when it comes to our physical abilities it’s true. Over time inactivity can lead to weakness and decreased mobility, which can lead to an increased risk of falling. This can create a vicious cycle of falling, increased fear of falling, and inactivity: 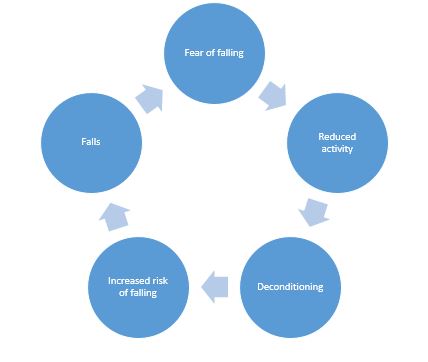 Once in this cycle it can be hard to reverse it. It is important to encourage and enable physical activity via effective strength and balance activities7, as part of a multifactorial assessment and intervention, to tackle deconditioning, in order to improve confidence and reverse the cycle:

Multifactorial falls risk assessments can reduce falls by 24% and should be offered to all older people who have fallen or are at risk of falls1. By acknowledging the fear of falling and the associated consequences, we can help prevent people from falling into fear, and that fear leading to falling.

Written by Oliver Williams, a Physiotherapist and Speciality Registrar in Public Health, Wales 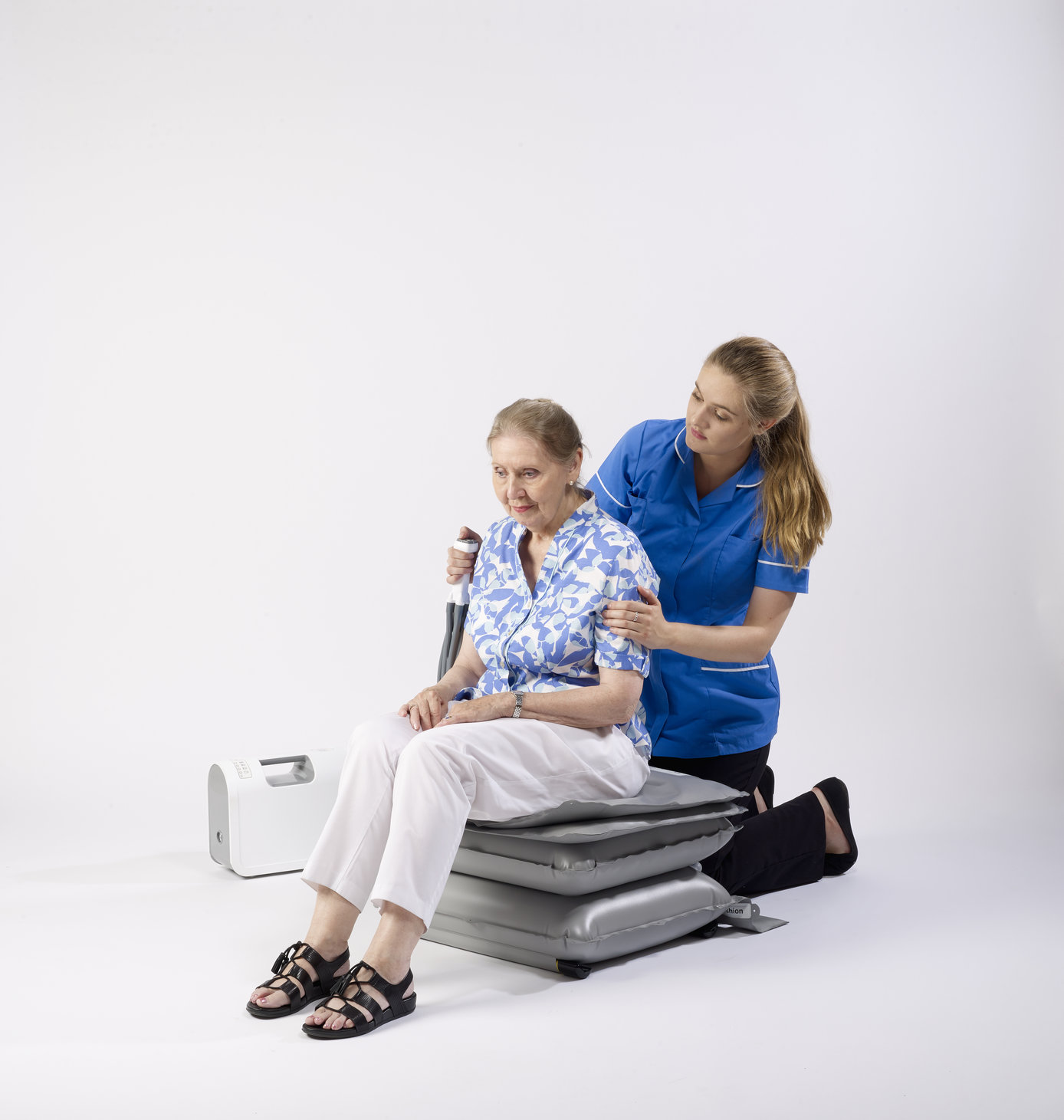 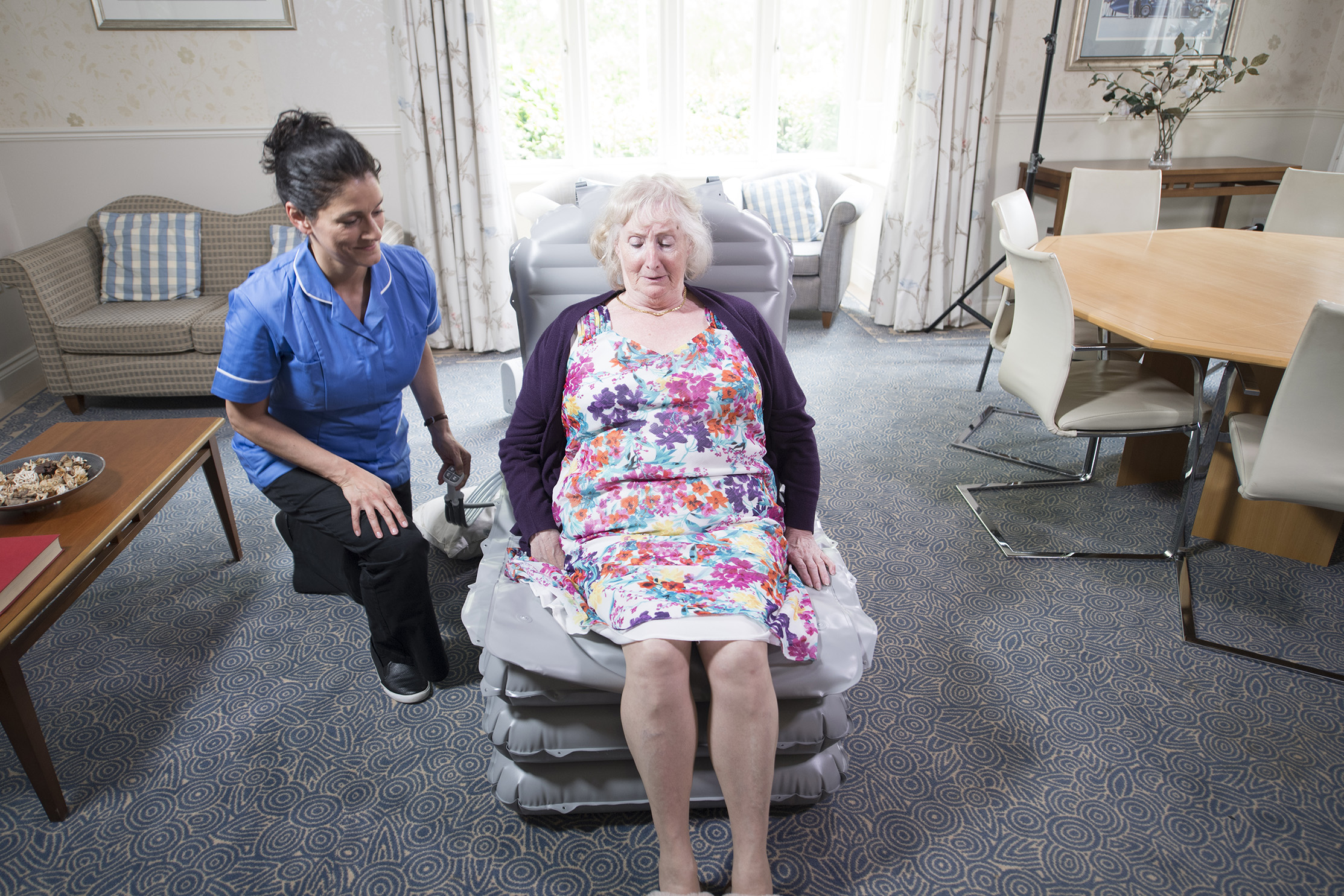